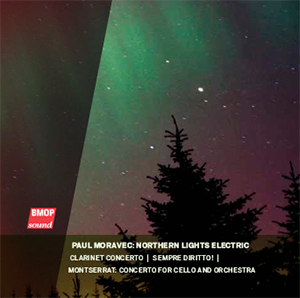 From the liner notes…

While music — especially music without words — speaks an essentially abstract, nonrepresentational language, my own music often seems to involve some physical, tangible catalyst. Three of the four compositions on this album were directly inspired by a personal experience at some particular place: New Hampshire (Northern Lights Electric), Venice (Sempre Diritto!), and Catalonia (Montserrat). In a way, the fourth work, Clarinet Concerto, also owes something to “a sense of place,” as I composed it during my recent artist residency at the Institute for Advanced Study in Princeton, NJ, one of my childhood hometowns, full of happy memories and current associations.

Northern Lights Electric began its life as an octet commissioned and premiered by the North Country Chamber Players in 1992. In setting out to musicalize the majestic quality of the aurora borealis, I conceived the piece orchestrally more than in terms of chamber music, and I finally orchestrated it in 2000. The richer textures, greater timbral variety, and larger canvas of a full orchestra more effectively project my impressions of this astonishing natural phenomenon.

Clarinet Concerto is the second piece I’ve written for David Krakauer, the first being Tempest Fantasy, which he premiered with Trio Solisti in 2003. The Concerto especially makes use of his astounding stylistic range and technical virtuosity. In our early discussions about the piece, David suggested that I make it explicitly klezmer, but I demurred. I said that as an Episcopalian I didn’t feel quite qualified, to which he replied, “You’re Slavic. Close enough.”

Sempre Diritto! was composed in Italy during the summer of 1991, inspired by my experience of getting lost in the convolutions of Venice. At the time I was listening a lot to Steve Reich’s Music for 18 Musicians, and its influence seems to have found its way into my musical thinking. Sempre Diritto! is the closest I’ve come to Minimalism in my own music. In spatial, geometric terms, I imagine the repeating, gradually evolving patterns as describing
ever-tightening spirals. Sempre Diritto! is also my most neoclassical work, as reflected in its structural repose and Haydnesque orchestration.

The idea for Montserrat occurred to me when I happened upon a statue of Pablo Casals at the legendary mountain monastery north of Barcelona in 1994. The concerto gestated over a period of several years and I finally finished it at the MacDowell Colony in the summer of 2001. My memory of its premiere in Manhattan that November is colored by the lingering fear and uncertainty all New Yorkers experienced following the 9/11 attacks, but also by the determination to get on with making music. Cellist Arthur Fiacco and conductor Kent Tritle presented the premiere at Kent’s professional home, the Church of St. Ignatius Loyola, which is especially apt in light of Ignatius’s own historical and spiritual identification with the monastery at Montserrat.

Over the 43 years that the North Country Chamber Players have brought beautiful chamber music to Northern New Hampshire, their reach has extended well beyond the concert hall.