A Homecoming for the North Country Chamber Players 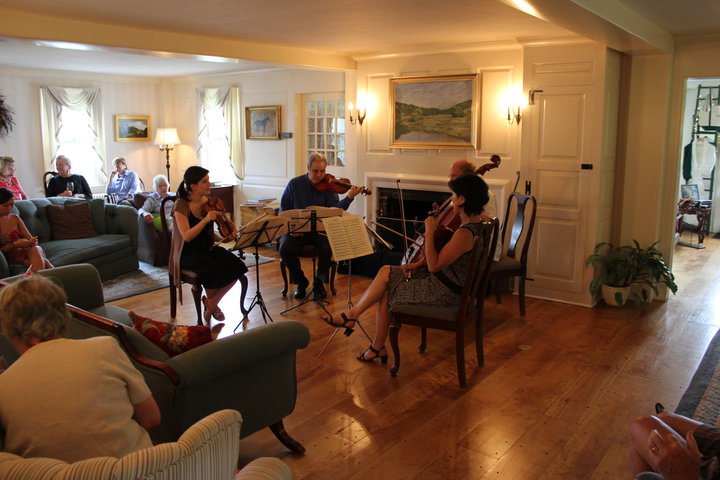 A Homecoming for the North Country Chamber Players

For Ronnie Bauch and Chris Finckel, two of the founding members of the North Country Chamber Players of Franconia, August 12 was like coming home. We had invited a string quartet of the Chamber Players to present an informal concert in the Inn’s living room for a small group of guests. It had been about 25 years ago that the Chamber Players had last played in the room and we were very excited to welcome them back.

Ronnie and Chris were well acquainted with Dorothy Adair Guider, the first owner of the house and one of the original trustees – as well as good friend — to the renowned musical group in their early days.

“The Chamber Players have a very long and quite significant history with Adair and its original inhabitant, Dorothy Guider,” says Ronnie. “Dorothy was wonderful and generous to us, and we developed a close relationship over the years. We were indebted to her in many, many ways.”

During the early ‘80s, Dorothy was instrumental in arranging for the Chamber Players to tour the North Country, presenting programs to school children. Ronnie recalls that Dorothy offered her house as a home base during those days. “We’d arrive from New York City at 6:30 or 7 and head to the third floor,” says Ronnie. “As we passed the second floor we’d hear, ‘How do!’ (from Dorothy). The next day we’d be off to the far reaches of New Hampshire, a one room schoolhouse in Stark, to high schools in Berlin and Groveton.”

During the concert, Ronnie on violin, Chris on cello, and violist Ah Ling Neu and violinist Miki-Sophia Cloud offered selections from Mozart, Gershwin and Cole Porter for the two-dozen guests gathered in the living room on the comfortable chairs and sofas which had been pushed back to make room for the musicians in front of the fireplace.

Along with the music, Ronnie regaled the guests with stories about Dorothy and her relationship to the community and the Chamber Players. In 1927, Dorothy received the home as a wedding present from her father, Frank Hogan, an influential lawyer, and she lived there until her death in 1991. Having grown up in Washington, DC, she “knew everyone,” including every president from Wilson on.

Dorothy’s birthday was in late July, and “she was a Leo in every sense of the word,” says Ronnie. One of his fondest memories is of the several times he and other Chamber players would surprise her by sneaking into Adair through the back door just off the living room on the morning of her birthday, and setting up and playing some Mozart selections for her.

She was a childhood friend of Helen Hayes, the two having met at age six in ballet class, and Robbie recalls having tea with the women during one of his visits to Adair.

He also recalled Dorothy’s abilities as a community leader and mediator, which extended to her tenure as the president of Franconia College during some of its troubled years.

Several of the Gershwin and Cole Porter tunes played by the quartet during their visit had been played before in the very same living room. Ronnie says that Cole Porter, the grandson of the richest man in Indiana, who had a luxurious lifestyle, reminds him greatly of the kind of life Dorothy led during the ‘30s, traveling to Europe on ocean liners and eating at wonderful restaurants.

The Guider Steinway, which sat in a corner of the living room for 50 years and is signed by the Polish pianist Paderewski, now graces Alumni Hall in Haverhill. Upon Dorothy’s death it was bequeathed to the Chamber Players and keeps alive her memory and her connection to the musical group.

Over the 39 years that the North Country Chamber Players have brought beautiful chamber music to Northern New Hampshire, their reach has extended well beyond the concert hall.