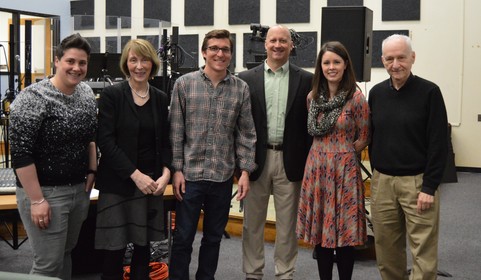 WHITEFIELD — On May 20, members of the North Country Chamber Players paid a visit to band members at White Mountains Regional High School. The visit was prompted in part because the high school band is learning how to rehearse and perform without a conductor, similar to how a chamber ensemble operates.

The NCCP managed by Allen Blustine performs these residencies throughout different schools in the North Country.

WMRHS band director Michael Martins explained, “I had been in touch with Mr. Blustine earlier in the year and let him know what we were trying to do here. He offered to visit and hold a residency with us.”

Martins went on to say, “After they played a three movement composition by Hungarian composer Ligeti, the quintet took up conversation with the students.”

The conversation included subjects such as soloing, rehearsal and performance techniques and musical preparation.

“Once the topic shifted to the bands goal of working without a conductor the quintet asked to have the band perform some of the pieces that will be performed at the upcoming Pops Concert on May 11,” Martins said.

The quintet worked with the band on different sections of their concert pieces and was impressed with the ability of the band to perform conductor-less.

The upcoming Pops concert will be held on May 11 at 7 p.m., in the WMRHS gymnasium. Admission is free and snacks and beverages will be presented and sold by the WMRHS Culinary and Hospitality departments. The WMRHS Art department will have various works on display in the hallway. Bands will include the district Jr. High concert band, Jr. High jazz band, WMRHS jazz band and WMRHS concert band.

Martins said, “Though the bands have been using student conductors (no adults) for the last two years, they will perform without any conductors at all at this Pops concert.”

Over the 43 years that the North Country Chamber Players have brought beautiful chamber music to Northern New Hampshire, their reach has extended well beyond the concert hall.