The Keeper of Stray Ladies 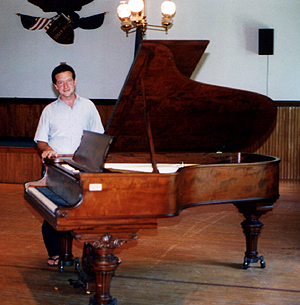 The Keeper of Stray Ladies

SUGAR HILL, NH – For more than 20 years, those who treasured the history of the gleaming Steinway coddled and coaxed it as best they could to make music every summer. After all, the piano once belonged to one of this little mountain town’s most illustrious and glamorous residents and had time and elements continued to diminish its capacity for music, so too would it have stolen a part of history, of an era when a young movie star charmed a community and brought a bit of Hollywood to the hills.

The Bette Davis piano, as its called, was given to the town in 1970, which in turn has loaned it to the North Country Chamber Players since their first performance back in 1978. “It wasn’t in great shape,” said Stephen Dignazio, executive director of the chamber players. “We’ve nursed it along.”

The Bette Davis piano resides in the Sugar Hill, NH town hall. Her piano is not the only legacy Davis left to Sugar Hill. There are a wealth of memories still in the recall of older citizens. The historical society has some of her memorabilia and the woods of neighboring Franconia hold a tribute to the man she loved and lost during her Sugar Hill years.

Built in 1903, the piano was reputedly rescued by Davis at a New York auction house and brought to her home, an old barn she turned into Butternut Lodge. When the house was purchased about 40 years ago by Peckett`s on Sugar Hill, the inn where she first stayed, the piano was among the acquisitions and provided the music for many a party and even accompanied the Bretton Woods Boys` Choir. The inn closed in the late 1960s and the piano given to the town in 1970. For several years, it sat in the meetinghouse before its new incarnation with the chamber players.

As the North Country Chamber Players celebrated their 21st season in 1999, the Bette Davis piano was the focal point of their summer concerts. And as the music played, no doubt there were those in the audience who recalled the days when the young actress, barely in her 30s and an Academy Award winner, came to town for a visit and stayed.

It was here she built a magnificent house and fell in love with the man next door. At the same time she was just another local, throwing herself into the life of the times – skiing with locals and even having her own booth at the old Pioneer Club, she brought with her her other life, which is illustrated by the amazing world premiere of her movie, `The Great Lie,` hosted on an early spring day in neighboring Littleton nearly half a century ago.

“She liked the anonymity of the town,” said Paul Hayward, proprietor of the Homestead Bed and Breakfast and the seventh generation of his family to live in the community.

She may have shopped in the stores among the locals, tromped in the woods and skied down the slopes, but she was Hollywood. In April 1941, Littleton pulled out all the stops to host a world premiere of her movie, `The Great Lie,` which happened on her 33rd birthday. Newspaper accounts say 20,000 watched the torch light parade.

The star of her day, Davis is responsible for bringing at least one person to Sugar Hill. Hayward said the woman he grew up calling Aunt Ellie came to town on a train from Beverly, Mass., arriving at the Homestead and declaring that she was going to call on Davis. “She came here soley because of Bette Davis,” Hayward said. “She said she was going to call her and because her number was in the book, that`s what she did.”

“She called Bette Davis and asked if she could visit and she said yes. She went over and had tea and came back and told everyone that she stayed until she asked me to leave.”

Mission accomplished, Eleanor Scherr decided to stay, living and working at the Homestead to the end of her life.

Another tangible legacy of her life here is in the woods of Franconia. Davis met her second husband, Arthur Farnsworth, when he was the assistant manager at Peckett`s.

According to the lore and legend, Davis was immediately smitten and even got herself lost in the woods of Franconia, knowing that Farnsworth would be the one to come searching for her. They married in 1940, but their union brief, ending with his death in 1943.

Two weeks after falling down a flight of stairs and knocking his head at Butternut, Farnsworth collapsed on a Hollywood sidewalk and died a few days later. After that, Davis` visits to Sugar Hill were less frequent.

Butternut was sold about 20 years after she first came to the town and it`s said that after that, a plaque appeared on a large boulder in Coppermine Brook, which can still be seen today.

In memorium to Arthur Farnsworth. The Keeper of Stray Ladies. Pecketts 1939. Presented by a Grateful One.

Over the 39 years that the North Country Chamber Players have brought beautiful chamber music to Northern New Hampshire, their reach has extended well beyond the concert hall.